A shot of success for di Bosco Horbury 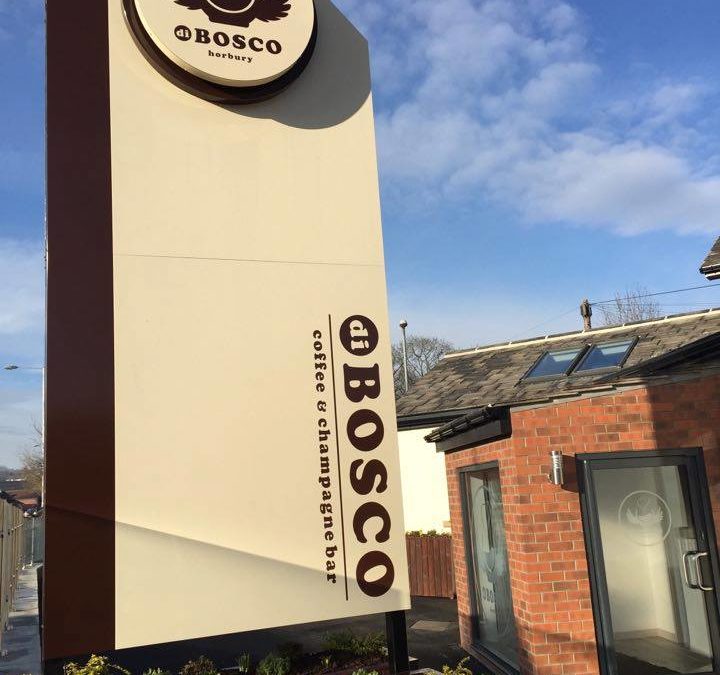 From humble beginnings to one of West Yorkshire’s best coffee and champagne spots, di Bosco is more than 150 years in the making. Peter Hunter had big ideas for his Horbury bar. We were glad to help him on a journey to a refined artisanal business…

The di Bosco brand has its origins in a figure from Catholic history – St. John Bosco, known for his benevolent work around Europe, fighting the effects of poverty through his own church order. This was named the Salesian school, and it spread across the globe.

Eventually, a Thai member began to cultivate coffee beans and formed the company di Bosco Coffee to support fair trade farmers. Peter believed in these values. He met with the company in Bangkok and started to plan a British coffee bar under the same brand.

New opportunities, however, were quick to spring up. Peter was looking at a former public house in Horbury town for the premises, but the adjacent car park also became available. Suddenly there was a lot more space to buy and invest in.

On a trip to Leeds, too, Peter came across many luxury bars. He was inspired to begin financing a fit-out, equipment, high-end product orders, an extension, and even a 700 sq ft. orangery.

But to do so, he needed support. Peter found Johnson Reed through a local supplier. We talked through what he was hoping to do, di Bosco’s background, and how renovation and refurbishment costs might shape up.

The clarity of Peter’s concept worked in di Bosco Horbury’s favour; the UK has a proven market for elegant, hybrid coffee venues. Johnson Reed arranged equipment leasing for furniture, electrical appliances, and POS cashier management systems. We arranged quick approval for all items so that suppliers were paid on time.

Soon after, the business opened to a very welcoming community. Thanks in part to our lease support, Peter obtained the resources he needed and has been able to create the kind of atmosphere he had always dreamt of. di Bosco Horbury is a huge hit, and we look forward to seeing where they go next…

Johnson Reed were pivotal in enabling us to achieve our April opening date. They understood our requirements in no time at all and acted on them quickly. We’ll be using them again soon for further equipment purchases as our business grows.