Hooked fish and chips ready to re-launch after accident

Located just 10 minutes from Heathrow Airport is a traditional Fish and Chip shop, run by Bally. Originally, Bally worked as an IT project manager but helped out at his friend’s fish and chip shop alongside this. He enjoyed the work so much, that he wanted to pursue a career in the catering industry and actually bought the shop off his friend, who was wanting to sell the business, meaning Bally was the new owner of Hooked fish and chips.

However, Bally ran into an issue. After a year of owning the business he called in some contractors to clean his extractors. He was worried that they hadn’t done a very good job and unfortunately Bally was right. A few months later, the extractor caused a fire in the shop. 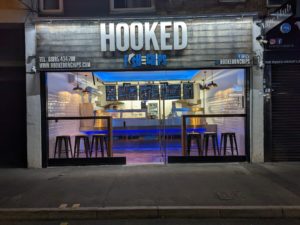 It took Bally 10 months to re-open after the fire and since he hadn’t been trading, cash was extremely tight. Bally wanted to install a new frying range into his shop and contacted 12 manufacturers to see if they could help. Only Martyn Edwards Frank Ford frying ranges could provide Bally with the range he needed. He contacted JR and was impressed with just how quick the turnaround was. “Mark requested documents from me which I sent over on WhatsApp within the hour, two days later the agreement was confirmed and everything was sorted”.

Bally also added “Because of the relationship between Mark and the supplier the process was so fast and seamless”. The main benefit that appealed to Bally was just “how much cheaper it made purchasing the range”. It made financial sense to him, not forgetting the additional perk of making the equipment “tax deductible”.

Not only financially, but practically, the agreement allowed Bally to get the “latest technology in the frying range industry at an affordable price”. This has allowed productivity to improve from the new range as it now takes “20 minutes to set up in the morning instead of 1 hour and 40 minutes” and the new equipment allows Bally to work alone, leaving there to be “no need for staff” as he is massively helped by his new efficient equipment.

Bally left us an additional testimonial…

“Amazing service really quick, Mark took my details and gave me his quick view on how fast he could get this sorted, easy to contact kept me updates really easy…thank you!”

Are you, like Bally, interested in expanding your business as soon as today? If so, feel free to check out our differing financial services here.